Although it is now out of print, Waddington's Buccaneer can hardly be said to be an unsucessful game. It was manufactured in various forms for at least twenty years, but ultimately sales apparently dropped below some threshold level and it is no longer manufactured. Of course, the market for board games in general is probably a lot smaller than it once was.

I'm interested in the game is for nostalgic reasons. In the early sixties my Mum, Dad, sister and I used to spend many hours playing Buccaneer. As a child I was fascinated by the detail of the playing board (I remember this of Cluedo too, but don't remember playing the game very much!).

I'm sure there are many unused games and partial games out there... and a few people who would be interested in complete games, spare pieces, copies of the rules, and so on for the same reasons as me. If you are having a particularly bad case of nostalgia and have not obtained a copy of the game yet, I suggest you download the JPG of the game board below. This might tide you over until you can get your hands on a game!

Buccaneer was patented by a Mr. George. G. Bull in 1937-38. A full copy of the original patent can be seen here. It is believed that Mr Bull's friend Cecil Whitehouse played a part in the early development of the game. Cecil's daughter tells me that the original prototype board was painted on oilcloth and that Treasure Island was a sort of Lazy Susan arrangement on ball-bearings. It is thought that the friends started working on the game before the war, while they were working at Fort Dunlop in Birmingham. The game was bought by Waddingtons of Leeds (England) but was not marketed very actively until after the patent ran out. This meant that, sadly, the inventors of the game received very little reward.

There are several UK versions of which I'm aware (maybe as many as eight or ten). Variations of the game were also sold in Europe and the US, under different names (see links at the bottom of this page). I'm not sure of the dates of manufacture given, but the copyright dates are confirmed.

The pictures below are of games that were offered for sale on the Internet at some time, but have already been sold. It is version number (3) shown below that I used to play as a child. You will notice that there was a switch from six players to four at some point. I think that this was due to the fact that certain players in the six player game have an advantage of having better access to the spare ports (in that they are nearer to their own home ports). There was also a switch to not having a hole in the middle of the board, and back again. If you are looking to play the game for nostalgic reasons, note that the versions of the game shown in (3), (4), and (5) [and possibly (2)] below are essentially identical.

(1) Possibly the earliest edition, with roll-up board (1937 to early fifties). Six player. JPEGs of cards and rules from 1938 version: ZIP File. This one said to be from the late fifties:

(4) 1958 copyright on board and rules, red & blue box with (much lighter weight) board in box. Otherwise, the same as the version shown above. Believed to be the version produced in the early- to mid-sixties. Six player:

(5) 1958 copyright on board and rules. Blue box with board in box, but otherwise the same as above. Believed to be the version manufactured in the mid- to late-sixties. Does have a "Treasure Island" hole in the board, although it is not shown in this picture. Six player:

(6) Late Sixties/early seventies (?). No "Treasure Island" hole in board. Playing area reduced from 24x24 to 20x20 and game changed from six players to four players. In the old game the ports and islands were placed on different diagonals so that it would take an extra turn to get from one place to another. In this newer version things are more "lined up" and symmetrical. This was possibly intended to remove perceived advantages of one port over another, or maybe just to encourage trading at ports.

(7) Copyright unknown. Thought to be identical to No. 8 below, except for the box. Could be before or after No. 8. Four player: 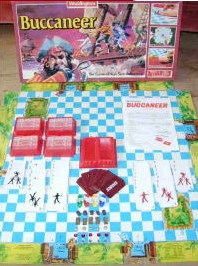 (8) Copyright 1976. I believe this to be the latest "regular" version, manufactured throughout the late seventies and possibly into the early eighties. Four-piece (sectional) board. Four player. Rules for this version: Page 1, 2, 3, 4, 5, 6 (or as a PDF).

(9) 2006 "Pirates of the Caribbean" version from Hasbro. Hasbro revived the game to coincide with the movie release. Much nicer graphics, in my opinion, than the 1976 version but still a 4-player game.

(10) ... and last, but no means least - my favorite picture of all. I was very pleased when in early 2011 I received an email from Cecil Whitehouse's daughter, Dot. She told me more about the invention of the game and sent me a photo of Cecil Whitehouse's own set - complete with hand-written cards. Click on the picture to see a larger version.

A big thanks to Dot for those last two pictures!

If you have any more information about the game, are interested in obtaining a copy, or have a complete or partial copy for sale, I can be contacted at steve at stevechampion dot com. A big thank-you to all the e-mail correspondents who have helped me piece together this information, and the people whose pictures are assembled here.

Pictures of Buccaneer from Google.

There are a couple of other games from the fifties that I am interested in for reasons of nostalgia.

“Scoop” is the Waddington’s game whereby players compete to fill a newspaper “front page” with stories. The unusual feature of Scoop is the cardboard “telephone” which players operate in order to get a “decision” on stories collected. I remembered playing this at an Aunt’s & Uncle’s house in the sixties. I managed to buy a copy, in reasonable condition and I have played this game with my family quite a bit.

Pictures of Scoop from Google.

“Astron” is a Waddington’s game whereby players race from the Earth to Saturn collecting points for landing at bases along the way. The unusual feature of Astron is the playing board which consists of a box with a transparent window which contains the playing surface rolled up scroll-style between two wooden dowels. The playing area is actually nearly 4 1/2 ft long. I remembered this game (from visits to another Aunt & Uncle) only vaguely, and did not know its name. Fortunately, my sister spotted a copy for sale on eBay so we were able to identify it and obtain one. My copy is not in very good condition, but is playable.

Pictures of Astron from Google.

If time permits, I will place some scans of rules and cards for these games here.

Astron board (Topology only, XLSX). Note that the transparent window reveals 10x12 squares at any one time. I was unable to make a decent scan without complete disassembly, so I have recorded the contents of each playing square here without reproducing the artwork per-se. If someone has an already-destroyed copy of the game, perhaps it can be scanned and stitched together like the Bucanneer board I did for this page.

Astron score sheet alternative (XLSX). I made this because it is easier to use with the ship colours and names filled in by hand (due to playing order not necessarilly being the same as the colours are listed).